At last! An opportunity to get out in the field again after being consumed by work for so long! For the seventh time in eight years, a quiet celebration of the International Migratory Bird Day took place in St. Kitts. I.M.B.D is celebrated in the Caribbean on or around the second Saturday in October. 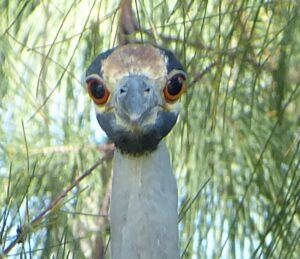 As is customary I go birding for two full days, or approximately 20 hours or less, roughly half of the time around our local ponds and the rest of the time up in the hills or by the shoreline. The aim is to spot as many different bird species as possible during that time, and hoping to break my personal record of 73 species sighted in St. Kitts, set in 2014. 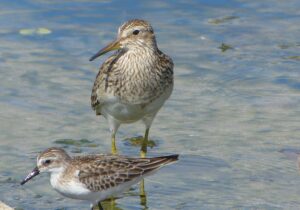 It started on Saturday. October 15th, when I got a great start as our ponds were full of Waders, particularly in the Half Moon Bay pond. The following Monday, I took off from work and went up in the hills at Wingfield Level searching for Warblers, and then returning to sea level. Finally, a couple of weekends later, I finished my 20 hours.

No new lifers for me, nor any extremely rare birds but a few interesting sightings. An immature Tricolored Heron was a plus and a large Pectoral Sandpiper which initially looked by a Ruff caused some excitement. Several Warblers were spotted at Wingfield in one location, over a period of less than an hour, and was thrilling! Very enjoyable!

With just three hours to go, I was a still a few short of the record, so travelling to Greatheeds Pond, I saw an American Coot and a Blue-Winged Teal, then on to the Basseterre Harbor, where I saw a Herring Gull and a Lesser Blacked-Backed Gull to bring me level with the record of 73 species. So on Saturday, November 5, I set out to Frigate Bay for my final hour and low and behold, right on Muddy Pond, all alone, was an American Golden Plover! Yes, I had done it in the final minutes, a personal record!

The total number of different bird species spotted was 74, one more than 73 that were spotted in 2014! A good feeling, no, a great feeling!! Not bad for a tiny little island like St. Kitts!

Below is a list of the Birds spotted over those few, very enjoyable days, in order in which they were seen. Life can be good sometimes!

The simple pleasures of life!