THE END OF A GREAT BIRDING SPOT!!

The End of the Greatest Birding Spot!!

All good things come to an end! One of the best birding hotspots in St.Kitts came to its natural closure this week! “The waterhole” on the South East Peninsula was a small pond just off of the main road which was initially thought to collect the rainwater from the hills which pooled in a small pond. And the bird life was awesome! 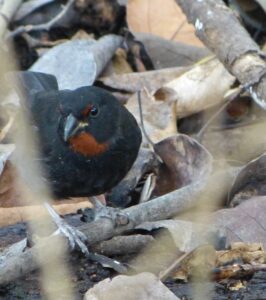 About six weeks ago I received a report that a lesser Antillean Saltator was spotted there. This is a rare bird that is endemic in just a few of the Lesser Antillean islands, and believed to be the first sighting in St. Kitts since 2006. Having never seen one before, I packed up and visited the spot for 4 of the 5 following weeks. And what a spot! For each of the 2 to 3 hours that I stayed, the action was literally non-stop! At every minute there was one or more birds spotted, and at times 5 or 6 birds, and a wonderful location to take photographs, and I took quite a few. There was always movement for you to look! And the thrill was that birds would drink and bath themselves just 8 or 9 feet from where you sat, allowing a great opportunity to take pictures. And all while you were just sitting, and cooling out! Birds that were seen included dozens and dozens of Pearly-eyed Thrashers, Scaley-breasted Thrashers, Zenaida Doves, White-winged Doves, Lesser Antillean Bullfinches, Black-faced Grassquits, Ground Doves, Yellow Warblers, Norther Parulas, Lesser Antillean Flycatcher, Caribbean Elaenias, and Banannaquits among other common species, and of course, the Lesser Antillean Saltator. Also seen were stray cats, goats, monkeys galore, etc. and of course, “Bambi” a young Deer that turned up adding to the experience! 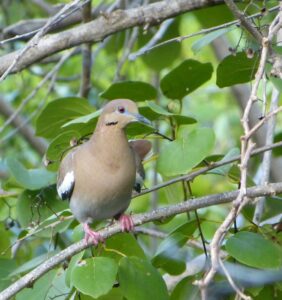 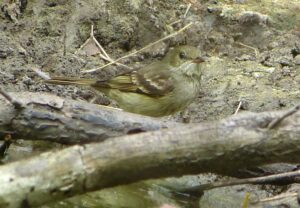 Regretfully, but somewhat understandably, the water hole ceased to exist when the water department brought in a backhoe and cleared some of the bushes, and fixed the freshwater pipe that was causing the water collection! It was a water pipe leak that had created the pond and not a collection of a natural runoff of rainwater!

Disappointed when I discovered the fate of the waterhole, I proceeded to walk on a new trail in the area, playing the recording of both a Lesser Antillean Pewee, and Saltator. About an hour had passed when I heard a loud distinct response to the L. A. Peewee recording. Amid much excitement I searched for a sighting of this bird, but in vain. I am about 95% sure it was a Pewee, but cannot say with absolute certainty that it was. I will be visiting spot again very soon! There is always next week!!