On Saturday October 28, I decided to go to the golf club and just practice a little chipping and putting. As I arrived at the putting green I casually looked to my left at the adjacent pond, and nearly fell down in shock!! About 30 yards away was a large brown bird with a large down-curved bill. It was much too big and much too dark to be a Whimbrel. Fortunately, I had brought along my Binos and my camera, and so I whipped them out and got to work right away. 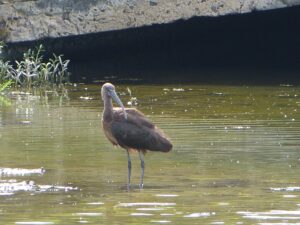 Dozens of pictures later and good observation with my Binos, there was no doubt, that this was a Glossy Ibis, a very rare bird for St.Kitts. It appeared to be an immature. 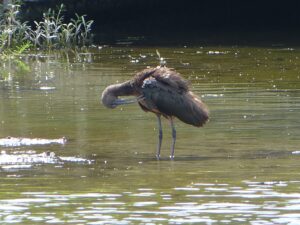