As is customary, in early October every year, there is a quiet celebration of International Migratory Bird Day (I.M.B.D.) in St. Kitts. I.M.B.D. is celebrated throughout North, Central & South America, and the Caribbean, on the second Saturday of October, every year.

In my case, I generally go birding for 2 full days, which will consume about 18 hours,(10 hours the first day, 8 hours the second) and then sometime over the next few days I will “use up” the remaining time until I get to 20 hours. There is only one goal, —- to see how many different Bird Species I can spot during this period. If any birds are spotted between the start date and the end date, then they also count, even if I am not officially “birding” at the time.

While I have attached a few pictures, the published quality here is nowhere near the actual quality of the pictures, unless you click on the pictures! The list of birds are at the end of the article.

I then headed to Frigate Bay, where after the passage of 2 recent Hurricanes, Irma & Maria, there were lots of accumulated water ponds, and lots and lots of waders! And the count started to increase steadily but surely. Up and up it went so after 8 hours I had spotted 57 different species. But the largest surprise, was between Half Moon Bay pond and the beach. I saw dozens and dozens, no—hundreds, of Scaly-naped pigeons. Every few feet, several would just fly out of the grape bushes, over and over again! And quite a few white-crowned pigeons mixed in to boot. Every exposed branch had several perched and cooling out. I have never seen anything like it. Hundreds! I can only assume they were blown there from the western part of the island which is their normal habitat, by Hurricane Maria! It was an amazing sight! I continued throughout the day, visiting other ponds and area of interest. I had been birding for 8 hours. 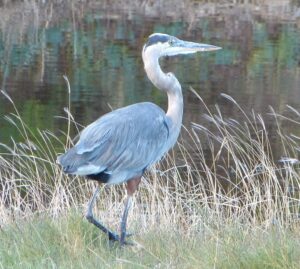 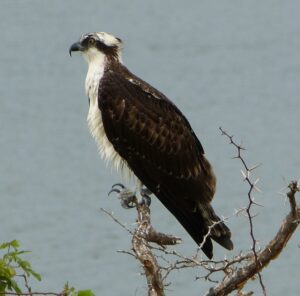 The following day, October 8th, driving to work and returning home, I spotted an additional 3 species, House Sparrows as expected right outside the office, a Lesser Black-Backed Gull, perched on a wreck on the Bay road, and a laughing Gull on the same wreck on the Bay road when on my way to golf. Later in the day, a Merlin, while playing a round of golf! 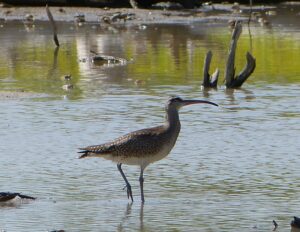 The following day I decided to try the South East Peninsula, and after 2.5 “official birding” hours, I had spotted a Caribbean Elania, Blue Winged Teal and a Great Blue Heron, bringing the total species up to 64 in just 10.5 hours of birding. Wow! I was well on track to beat the current record of 74 species in 20 hours!

Two days later, while visiting Kittitian Hill resort on a work related issue, I saw a Purple-throated Humming Bird and a Blackpoll Warbler. I was getting real exited now, as I had already seen 66 different species and still had to spend a whole day up in the mountains, which was scheduled for Monday, October 23, and I could hardly wait! The record of 74 species would surely be threatened! 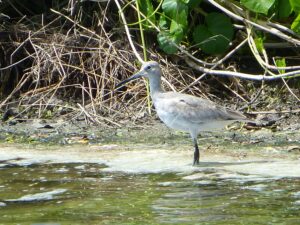 So on Monday, off I went, packed my bag, machete and all, and took off. I left home at around 6:30 am arriving at Wingfield level just before 7:00 am. Driving up I saw two Bridled-Quail Doves, which pleased me as they can be quite elusive. I had to park about 100 yards short of the open pasture area as two trees were blocking the road, obviously felled by the passages of Irma & Maria. The view of Brimstone Hill was well below my current altitude, and was eye-catching.

Up the short dirt road towards the tree canopy I cooped my way up, carefully, not wanting to disturb any birds in the bush!  I soon saw a female American Redstart, and shortly after, saw a male American Redstart, with a brilliant plumage, the orange and yellow colors contrasting with the black, it was a truly lovely sight. A little later, I saw a Stolid flycatcher with its two wing bars quite distinct, another one that not guaranteed to be seen. Then on the dirt road under the canopy I saw a bird foraging among the leaves on the ground which I did not recognize, but thought it might be a Thrush. I took lots of pictures, and when I found a chance, checked my book and sure enough it was a Swainson’s Thrush. I was ecstatic, as this was the first ever recording of a sighting of the Swainson’s Thrush in St. Kitts or Nevis. On I went, round the corner of the dirt road to an area in a small valley with big trees, which I honestly think is one of the most peaceful places in St. Kitts, no humans, no artificial noise, no confusion, just really peaceful. My sightings continued to grow, and the list continued to increase, with a Black & White Warbler, a Lesser Antillean Flycatcher, and a Scaly-breasted Thrasher. 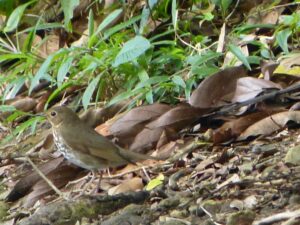 I left Wingfield, and went by the rain forest near the Zipline, and picked up the Brown Trembler, then off to Caribelle Batik grounds where I at saw the Green-throated Humming Bird, and then off again to the South East Peninsula, checking out all of the regular spots. Just before 4:00 pm and about to call it a day, Bam, Bam. I saw a Bobolink, a beautiful bird with Black and yellow stripes, and a Wilson’s Snipe. Very pleased with myself, I called it a day.

I still had another 1.5 hours to complete my 20 hours, which I hoped would be finished over the coming weekend. I did a quick check, and low and behold, I had blown through my previous record of 74, and had already sighted 77 different bird species, and still had a time in reserve. Happy does not adequately describe the feeling!

But then, who says lightening does not strike twice! I went to the golf club on Saturday afternoon to do a little chipping and putting, and as I casually glanced at the adjacent pond, there was large brown bird with a down-curved bill, which I had never seen before! Fortunately, I had my Bino’s and camera with me and quickly shot some pictures. I checked my book, and whambo, it was a Glossy Ibis! I could not believe it! A lifer for me, and although it had been seen in Nevis before, I have not found any records of it being sighted in St.Kitts! Another wonderful feeling! Two new birds for St.Kitts in under a week, and 3 in the month of October!! That does not happen too often!!

So on Sunday morning, off I go to Wingfield level for the last 1.5 hours to complete the 20 hours. Soon after I arrived, I saw a movement to my right, and when I turned to look, I just had enough time to see a Warbler fly away. It certainly had a yellow breast with black streaks and a pale back, but did not get a good enough look to confirm its I.D. A shame, really!

So I.M.B.D. for 2017 came to a quiet end with a grand total of 78 different species!! A new record! It will take some beating next year!